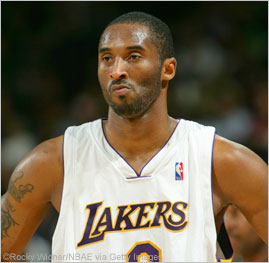 Kobe Bryant of the Los Angeles Lakers has been suspended one game without pay for striking Minnesota Timberwolves guard Marko Jaric in the face, it was announced today by Stu Jackson, NBA Executive Vice President, Basketball Operations.

The incident occurred last night with 58.7 remaining in the fourth period of the Lakers 117-107 (2OT) loss to the Timberwolves at Target Center. Bryant will serve his suspension tonight when the Lakers play the Milwaukee Bucks at Bradley Center.